Speech transcription is used in more and more use cases. Most of the large internet companies offer speech-to-text APIs. Even though those APIs are powerful and easy-to-use, they present major drawbacks:
At Quantmetry we worked on a challenge organized by Airbus to transcribe air traffic conversation between aircraft pilots and towers of controls. In this application the sounds are noisy, with high speech rate and lots of domain-specific vocabulary. We found that generic « off-the-shelf » APIs perform poorly on such difficult problems, and that training a custom model gives much better results.
See bellow some exemples of audio, with the comparison of the transcription of Google API and the one of model we built.
​
Google API transcription:

Google’s transcription is far from the real transcription. It gets some words right (« traffic », « behind »), but it adds some words that would not be used in the air traffic context (« internet page »). In comparison, our custom model gets only one word wrong (« the » vs « this »).

It is interesting to compare the transcription « write » by Google vs « right » by our model (and the real transcription). Those words are pronounced the same way, but « right » is much more probable in the air traffic context. This was learnt by our custom model, but not by Google which is trained for the generic case.

I just want a donut

A donut sounds nice though…

Those exemples illustrate that « off-the-shelf » APIs have difficulty to perform well on specific applications. In that case, it is better to train specific custom models.
Quantitatively, the Word Error Rate (or WER, the percentage of error on words between the inferred and the real transcription) on a set of test audio is much lower using our algorithm.
​
Comparison of the error of our algorithm and Google API on a test set of our use case. The lowest the Word Error Rate is, the most precise is the model.
So, how to train a custom speech recognition system?
There are two main approaches:
We used a deep-learning approach, Deep Speech, that was developed by Baidu and implemented by Mozilla in an open-source project. It is based on two main elements:
The following paragraphs describe in more details how the algorithm work, and how to train it in practice.

The acoustic model detects the letters that are said along the audio. To do so, the audio is cut into a sequence of small chunks of 0.1 seconds, and a model tries to detect the letter pronounced in each one of them. This type of problem is known as sequence-to-sequence: the model translates a sequence of sounds to a sequence of letters.
Recurrent Neural Networks (« RNN ») are a type of neural networks that allow to carry information along a sequence. Each step of network takes as input both an element of the sequence, and some context information transferred from the preceding elements. Our inputs here are the spectrograms of the audio chunks, and our outputs are the letters pronounced on those chunks. 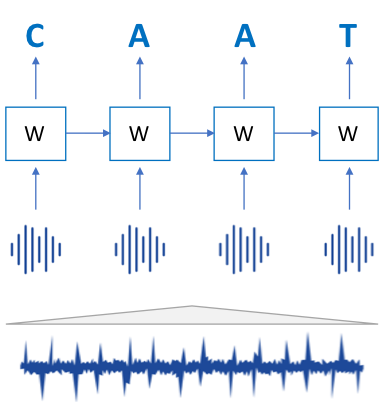 Representation of a Recurrent Neural Network for transcription. The audio wave is first cut into a sequence of chunks, which spectrograms are fed to the network. Each step of the network takes as input both a spectrogram and the information carried from the previous stpes; it outputs the letter pronounced in the chunk.
The architecture proposed by Deep Speech is a bit more complex than a vanilla RNN, with several fully connected layers for abstraction, and a bi-directional RNN to take into account the context from both the past and the future and the sequence. 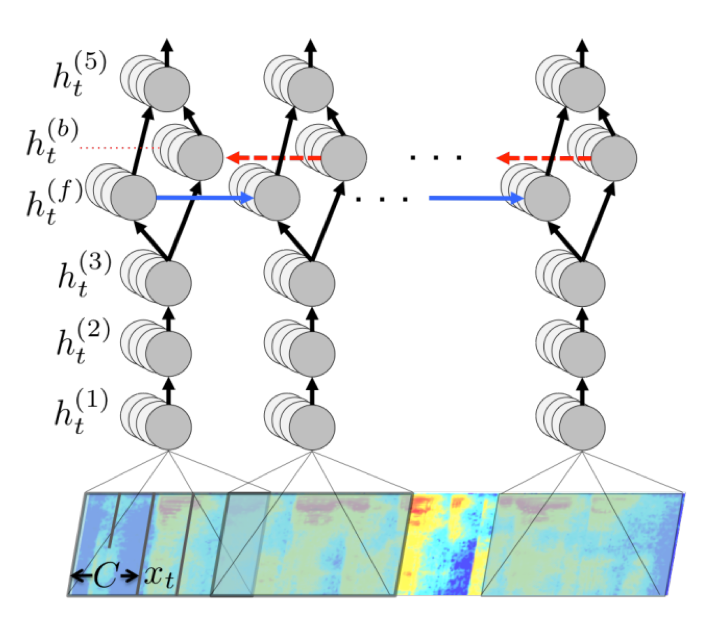 Architecture proposed in Deep Speech. The first three layers are fully connected. They are followed by a forward and a backward RNN (respectively carrying information from the past and the future of the sequence). The last layer is a softmax, which outputs a probability that a given letter is pronounced at a given step of the sequence.
The RNN outputs a raw sequence of characters. This sequence needs to be retreated to be turned into a meaningful sequence. This is the goal of the language model.

The language model: bringing meaning to the transcription

Language models are used to choose which sequence of words make the most sense for a given use-case. They are especially useful to differentiate between words that sound the same but are written differently. For instance, even though “right” and “write” sound the same, a good language model would prefer to output the sentence “please turn right” over “please turn right” as it makes more sense.
Language model are trained easily, as they do not require labeled data. There exist several approaches to train a language model. The most intuitive one, called n-grams, simply relies on the number of times that a sequence of n words occurs in the training corpus.
The example bellow shows the training of a bigram (n-gram with n=2) model for a corpus composed of two simple sentences.

Putting it together through an objective function

Every model of machine learning needs an objective function to optimize. Here is the one of our model:
​
<span class="cke_re